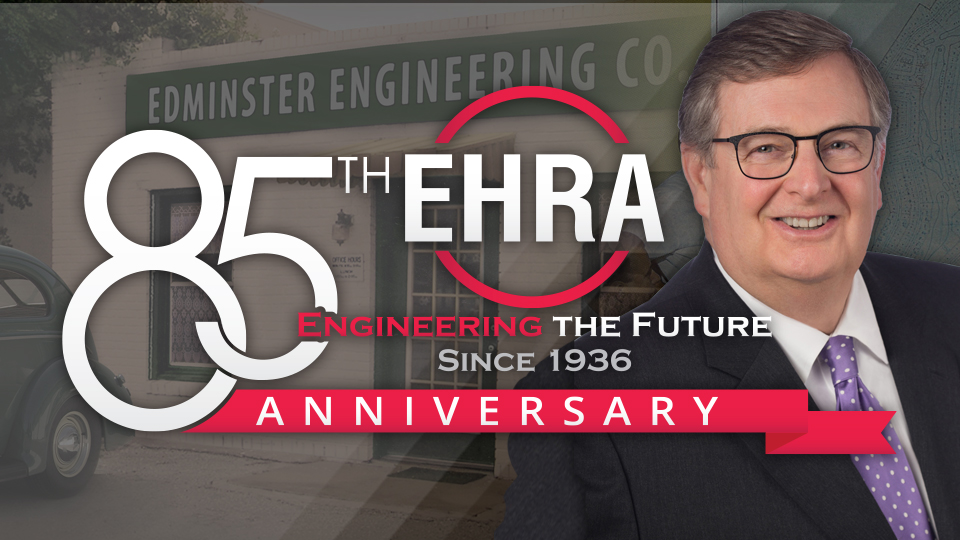 EHRA Engineering has a legacy as old as Texas itself. My ancestors were original settlers of the state, one of the Stephen F. Austin’s ‘Old 300’ families, and put down roots on the west bank of the San Bernard River, four miles west of Brazoria. My grandfather grew up on a farm in Leavenworth, Kansas, born in 1878; he was one of 12 children. As he came of age, he left the farm to follow his ambitions having learned the trade of surveying. After extensive world travel including survey work on the first railroad bult in the Philippines, he landed softly in Houston, Texas. This is where the EHRA legacy began.

TC Edminster, Sr. worked for the City of Houston. His signature appears on several historic plats including the annexation of Woodland Heights, Cottage Grove and the land in Iowa Colony where EHRA, coincidentally, is currently constructing the Meridiana Master Planned Community.  My grandmother attended Massey Business School and later took a secretarial position in downtown Houston. It was here that she met my grandfather who was 11 years her senior. In 1910, they were married and began their life together.

In 1936, TC Edminster, Sr. opened his own business on Kirby Drive at Sunset Boulevard. For some perspective, this was the edge of town at the time, and the roadway was made of crushed stone. In fact, in those days it was said that “nothing good happened west of Kirby Drive.”  Subsequently, TC Edminster, Jr. (my father) was coming of age. While attending Texas A&M University, World War II broke out and my dad was commissioned to serve.

He wound up in Southern France not long after the Battle of Normandy as an Adjunct to a General. It was here that he met my mother, ‘Johnnie’, a US Army Nurse. They were married in Marseilles, France and soon after the war ended. Dad returned to Texas A&M to complete his degree in Civil Engineering. Unfortunately, my grandfather had grown ill, and shortly after my father’s graduation, my grandfather passed away. That is when my father took the helm of Edminster Engineering.

In the early years it was a true family business. My grandfather, Truman Edminster, Sr., my cousin, Terry Russ and his wife, Cynthia all worked there. Did you notice that Terry was my dad’s nephew and my first cousin?  And yes, Terry and Cynthia are Jim’s mom and dad! The business grew during the ‘60’s and by 1968, Edminster Engineering had more work than personnel. So, a merger occurred with Conrad S. Hinshaw’s company, and thus began the eventual meld of Houston based businesses to form the EHRA we know today.

I am proud of my heritage, of my Houston legacy and that I see my family’s name on original documents that shaped the City we call home. This year, as we celebrate our 85th Anniversary, I look forward to sharing more stories of Houstonian legacy with other members of our industry and proving that these waters run deep from the ground down.